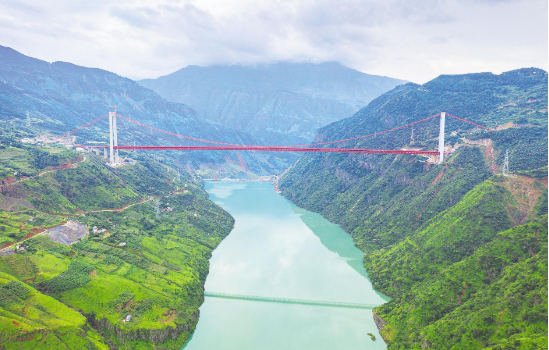 The Jin’an-Jinsha River Bridge, the world’s largest span suspension bridge constructed by Hubei-based China Communications 2nd Navigational Bureau, has been completed in Southwest China's Yunnan Province. It is expected to open to traffic in January next year.

The steel-girder suspension bridge has a main span of 1,386m, making it one of the longest ever built, and a maximum vertical-drop distance of 335m between the bridge deck and the Jinsha River below when it is full. The distance between the top of the bridges main tower and the river surface is approximately 500 meters, placing it at the fourth position in the list of highest bridges in the world.

Completion of the Jin’an-Jinsha River Bridge project is a milestone for the Huali Expressway project. After the project is fully completed, it will fill the gaps in the east-west layout of the expressway networks in Lijiang city and Panzhihua city, cutting travel time between Yunnan and Sichuan, as well as boosting the export of industrial crops and tourism in Lijiang.（en.hubei.gov.cn by Zhang Yawei）