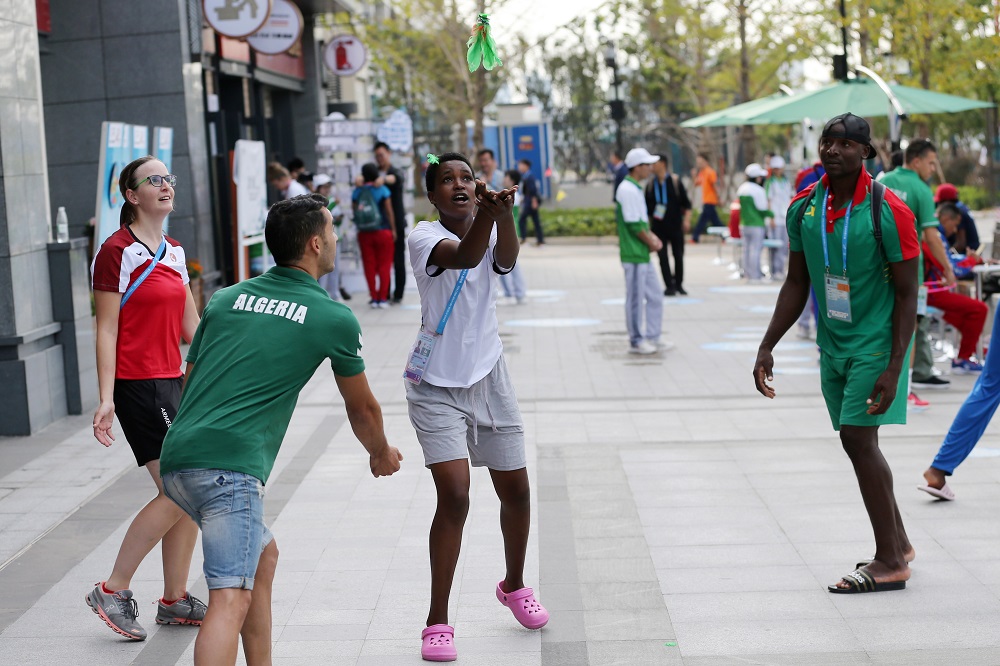 Athletes unwind by playing with a shuttlecock in the athletes' village during the 7th Military World Games in Wuhan, Hubei province, on Sunday. [WANG ZHUANGFEI/CHINA DAILY]

Athletes participating in the ongoing 7th Military World Games in Wuhan, Hubei province, praised the athletes' village, which was built for the first time in the games' history.

Started in March 2017, the construction of the village was completed at the end of this April. It is located beside Wuhan's Huangjia Lake with an area of 56.6 hectares consisting of residential, public, logistics and operational zones.

Offering a wide range of services, such as canteens, banks, parking places, transportation, fitness, medical treatment and souvenir shops, the village can meet the needs of about 10,000 athletes. Each apartment offers four to seven beds and is equipped with bathrooms, living rooms and a kitchen.

"I'm impressed by how good the food is in the canteen," said Craig Thomas Shortt from Ireland."All our accommodation is top class, so we are very happy."

Zhang Yin, deputy general manager of the athletes' canteen, said they had carefully designed the menu by studying food variety, nutritional facts and allergens. He added that the menu passed the review of the games' executive committee and experts, and they offer more than 500 dishes with each meal supplying about 100 of them, containing Western, Chinese and halal cuisines.

"I've learned that the village was built particularly for this event and it only took two years. That was impressive," said N'nang Ndong Pamphile, head of the delegation of the Gabonese Republic."The conditions of the accommodation are very good," he added.

Nils Elias Kammer from Germany said,"It's very big, and I haven't before seen a village that big and so well built."

The village officially opened on Oct 11. The Chinese delegation was the first to settle in that day and held a flag-raising ceremony on the public square. In the following days, the village also held ceremonies for each newly-arrived delegation.

Olivier Verhelle, the project manager of the International Military Sports Council－or CISM, the organizer of the Games－from Belgium, said he had visited Wuhan eight times and has been in close touch with the personnel responsible for the planning and design of the village.

"They had showed me the draft design and the map, and seeing it finished, it was like a dream coming true," he said.

Having worked for CISM since 2000, Verhelle said the best part of this year's games is the athletes' village because it helps the athletes get to know each other.

To prepare for the event, China has set higher organizing standards. Aside from the construction of the village, technology such as 5G communication network for media has been implemented, and one-on-one volunteer services are being provided for each delegation.

Herve Piccirillo, president of CISM, spoke highly of the effort.

"I was very impressed the first time I came to Wuhan by the commitment and the will of all the people of Wuhan to organize this competition," said Piccirillo from France.

"It's so difficult to organize this kind of competition. You can see around you the results of these commitments. The sport venues, the athletes village, it's wonderful. We've never seen that before in the history of CISM. All athletes say to me that they are very happy to be here. They are proud to be here to share the CISM values with the Chinese people."