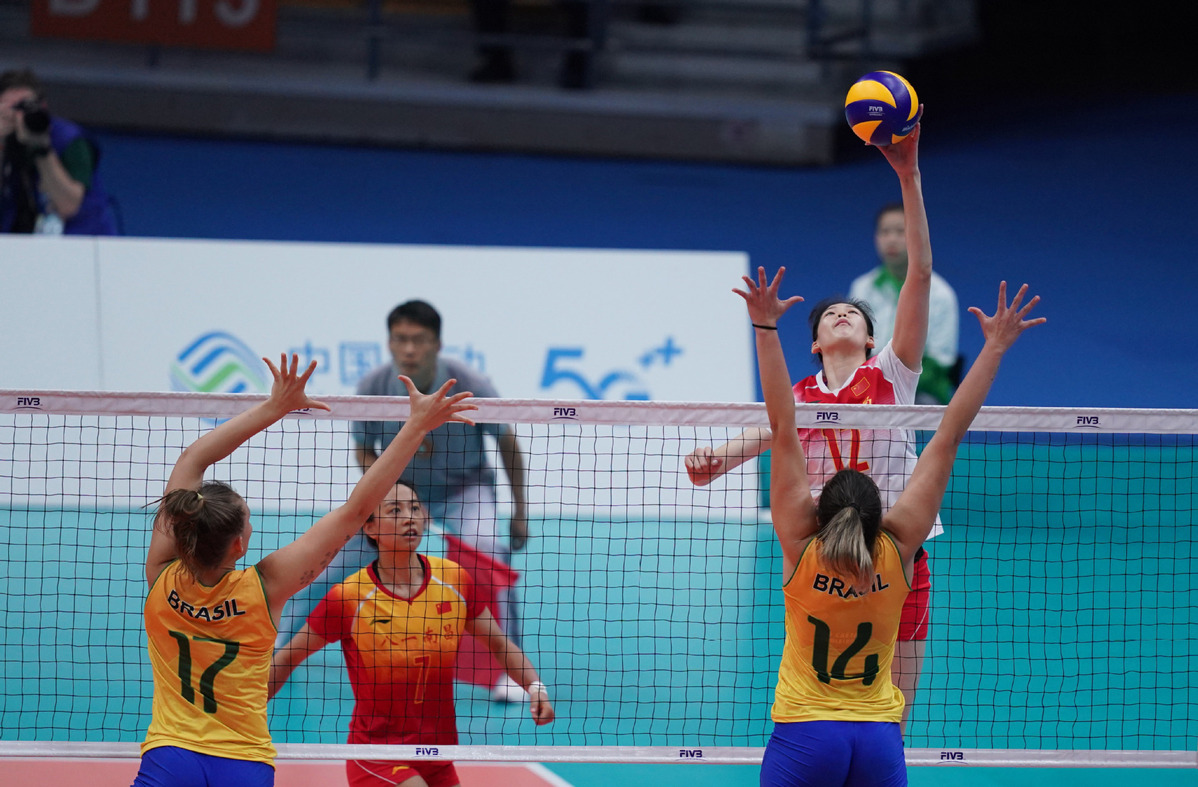 Li Yingying of the Bayi team unleashes a spike against Brazil during the women's volleyball final at the 7th Military World Games in Wuhan, Hubei province, on Tuesday. Bayi, which defeated the South Americans in the group stage, lost the final 3-1. [Photo/Xinhua]

It was an outcome that few inside a shell-shocked Wuhan Sports Center Gymnasium could have predicted.

Having breezed to Tuesday night's women's volleyball final at the Military World Games, China's star-studded Bayi squad had to settle for silver after being caught off guard by a Brazil team the host had easily defeated earlier in the tournament.

The Bayi squad, which includes several of the national team's recent World Cup winners, had not dropped a set on its way to the final with four wins from four matches - including a 3-0 Group A victory over the Brazilians last Thursday.

However, it was a vastly different Brazil that took to the court on Tuesday, with the South Americans starting a brand new lineup that Bayi was evidently unprepared for.

As Brazil seized control of proceedings, the deafening roars of encouragement from the home fans gradually morphed into more anxious-sounding screeches.

While trying to play down the enormity of the result, young Bayi star Li Yingying said she and her teammates had wilted in the pressure-cooker atmosphere.

"I'd say it's a normal result and we have to calmly face the final result," said Li.

"Personally speaking, I'm not satisfied with my performance and I did not play my best game.

"Our opponent played aggressively and we did not fully prepare for or expect this situation.

"The pressure affected our performance. We failed to maintain our momentum. They kept attacking and we tried to counterattack but still lost in the end."

"We are a very united team and we kept trying to react and adapt today under all kinds of pressure," said Liu.

"Our opponent played great and applied huge pressure on us, but we just failed to adjust enough during the match."

Head coach Wu Xiaojiang refused to criticize his players, and acknowledged Bayi had simply been beaten by the better team on the night.

"Our players tried hard. Although the result was not what we expected, this is also a process for us to grow," said Wu.

"I can see our players fought hard trying to win. We had the same attitude and did not give up in a tough situation.

"Brazil is a strong team and their lineup was very different from the group matches. We did not fully prepare for such a big change.

"We hope to learn from the defeat and try to grow stronger in the future.

"In terms of our own team, we couldn't have cooperated better. The national team players on our squad came back to train with Bayi pretty late as they had just played at the World Cup.

"If we had managed to be more patient and handled some key points better, we might have had a different result.

"I really want to thank all of my players who have been traveling and competing to win honor for our country. Many of them have been bothered by nagging injuries. I'm very touched that they kept fighting."

Still, the coach conceded that cooler heads in the heat of battle might have got China over the line.

"We also put Brazil under pressure at certain points in the match, but we were not patient enough. It's about our mentality... we gave them the chance."

Despite the sense of disappointment in the arena, fans were keen to show the Bayi players they had earned unconditional support, with a steady cascade of cheers accompanying the team to the locker room.

That gratitude was not lost on coach Wu, who added:"I told every player on the first day they joined the team that,'First of all, you are a soldier and then you are an athlete,'" Wu added.

"During this final, our players lived up to the reputation of Chinese soldiers and showed the spirit of the Chinese military by fighting until the last minute."

Brazil star Angelica Malinverno heaped praise on the Bayi squad, saying:"We studied and watched China, then changed our strategy, but playing here was so difficult because China has the best team."