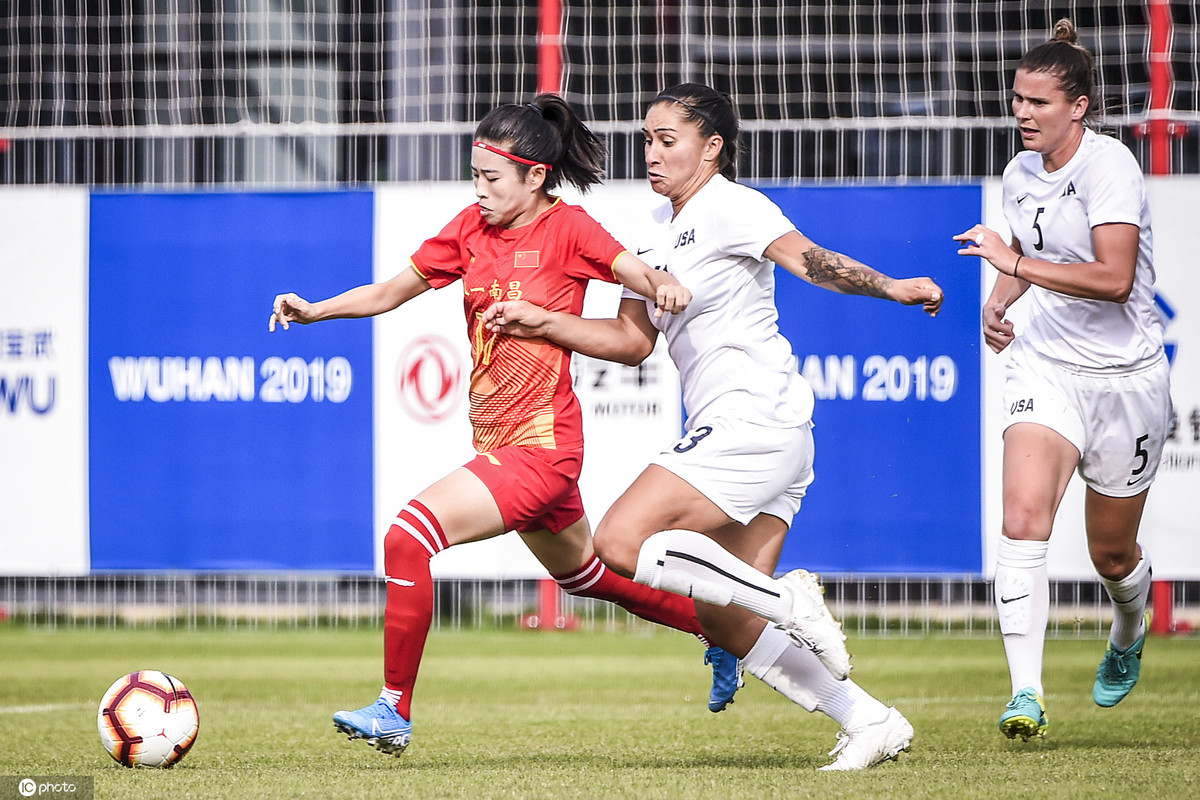 China's Xu Zhan speeds past Hanna Rozzi of the US during a 4-0 Group A victory for the host at the 7th Military World Games in Wuhan, Hubei province, on Monday. [Photo/IC]

China's Bayi women's soccer team crushed the United States 4-0 on Monday to move another step closer to gold at the 7th Military World Games in Wuhan.

The talented squad, which features nine internationals who played at this summer's World Cup finals in France, again looked a class apart from the opposition as goals from Yang Li, Lyu Yuting, Xiao Yuyi and Liu Yanqiu fired up the home fans and secured the host a spot in the semifinals.

As well as impressing up front, China's rock-solid defense has yet to concede at the tournament, thanks in large part to the fine form of goalkeeper Peng Shimeng, who produced another stellar effort against the Americans.

The 21-year-old is something of a fan favorite following her heroics in a scoreless draw with Spain at the World Cup, and her prowess between the sticks earned some of the loudest cheers from spectators.

Bayi advances to the last four as Group A's winner, with Monday's stroll following victories over South Korea (3-0) and Germany (4-0).

China will face Brazil in the first of Thursday's semifinals followed by the meeting of DPR Korea and South Korea.

"Our goal at this time is to win the gold," said Bayi head coach Zhao Zhengchun."However everything is possible in the soccer competition. All we can do is try our best to prepare for the next game.

"We finished the game with a 4-0 victory and made it impossible for our rivals to score in all three group matches. I'm satisfied with our performance. We delivered what we have been preparing, and we will try to produce a great performance in the semifinal.

"We came under pressure against the US, which played very aggressively. Before the match, I told our players to try to avoid injury. Our players still showed the spirit of the Chinese military."

Bayi's rout of the US was all the more impressive considering Zhao rested some of his stars.

"Several players have been bothered by nagging injuries, so I made some changes to let them recuperate and prepare better for the semifinal," said Zhao.

"The strongest rival on our journey to gold could be DPR Korea. Their overall strength and individual ability are impressive. They cooperate well and have great body strength."

Wuhan's very own soccer superstar Wang Shuang, who was a torchbearer at the Games' opening ceremony, has backed her Chinese international teammates to lead Bayi all the way to gold.

"I think the Bayi squad can win gold, but they will face many difficulties. There's going to be many challenges waiting for them," said Wang, who watched last week's victory over South Korea from the stands alongside national team coach Jia Xiuquan.

US coach Derrick Weyand said his side simply had no answers for a"world-class" opponent.

"Their coach (Zhao) is an amazing individual and his team is well organized. Our plan was to absorb pressure and counterattack," said Weyand.

"It's quite impressive. The first two goals came from corners and the first was world class. That's something we train for every day and it's amazing to see it happen. Quality, Team China. Well done!

"The US has been knocked out from the tournament, so now I'm cheering for China to win gold."

"The food is amazing and the spirit of Wuhan is phenomenal, including the friendship and peace it offered," said the US coach.

"From the start at the opening ceremony and everywhere we go, the communities here have been embracing the athletes from all over the world."