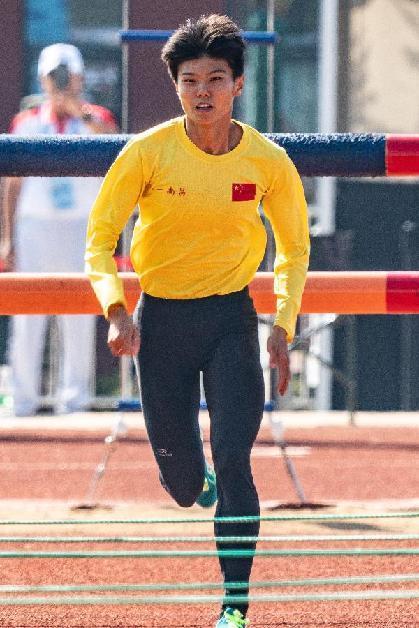 Lu Pinpin competes in the cross-country race at the Games in Wuhan, Hubei province. [Photo/Xinhua]

Lu, a member of the People's Liberation Army's Bayi military pentathlon team, competed in the cross-country race at the Games in Wuhan, Hubei province, on Wednesday morning. It was the last discipline of the pentathlon's women's individual event.

She had already achieved the best scores in the previous four disciplines: shooting, obstacle run, obstacle swimming and throwing, which made her the first to set out in the starting line at 9 am. Her score in the cross-country race would determine whether she would pocket the gold in this category.

After 13 minutes and 48 seconds, Lu completed a 4,000-meter run and reached the finish line first. Her score in all five disciplines combined was 5,627.2. Not only did she take the gold in women's individual, she also broke the world record and became the first female soldier in the world to score higher than 5,600 in military pentathlon sports.

"I feel so excited," she said."I just gave myself such a huge birthday present on my 23rd birthday. I am really happy."

"As a young competitor who joined the team only four years ago, Lu grew from a civilian to a soldier, then an officer to a world champion. Her progress has grown rapidly," Li said.

Lu, from Shandong province, joined the team in 2015. She used to be a rugby player and had always dreamed of joining the military when she was a little girl, so she called the team and offered to serve.

Li said she hesitated at first. She didn't think Lu's rugby talents would be sufficient for military pentathlon competition.

But Lu said she had also had experience in basketball, hurdles, long distance running and modern pentathlon, and she had run 800 meters in 2 minutes and 14 seconds.

"I thought since she had tried so many sports, she should be physically fit, so I let her join," Li said.

However, training Lu was not an easy task.

"She has a strong personality, so when she first joined the team she didn't know how to control her emotions," Li said."She did not obey orders that much and often replied defiantly."

The coach said the reason for Lu's attitude may have been because she had not been used to the military team model, and that made it hard for her to get along with others.

"She accepted all the compliments but refused to hear any criticism," she added.

But Li never gave up on Lu, who demonstrated great talent in sports and the obstacle run. Lu herself also trained frequently and set a goal of breaking the world record in the obstacle run.

In 2017, Lu participated in her first Military Pentathlon World Championships in Ecuador.

During the obstacle race－a 500 meter course consisting of 20 obstacles, including rope ladder, trip wire and balance beam－she fell off the beam.

At the 2018 World Championships in Austria, Li said Lu wanted to break the record so much that she dashed too hard in the first half of her run and fell off the 18th obstacle－the zigzag balance beam－losing her individual score.

Li said this time she felt the most nervous when Lu was competing in the obstacle run, which took place on Sunday. In the end, Lu ran perfectly and broke the world record with 2 minutes and 10 seconds, a record that Lu had anticipated for three years.

Li said during the athletes' selection for this year's military games, Lu lost the first time, ranking only fifth among her teammates.

"From fifth the first time, second the second time and first in the third and fourth time, her performance got better and better," she said.

"Over the last four years, she has progressed significantly and has become increasingly composed, which helped her win the championship today," she added.

"I think in previous competitions I was still a bit young and had just started to learn about the military pentathlon, so mistakes like those were good lessons for me to perform better this year," Lu said, adding that she felt the most pleased to be able to train with a great team and great coach.