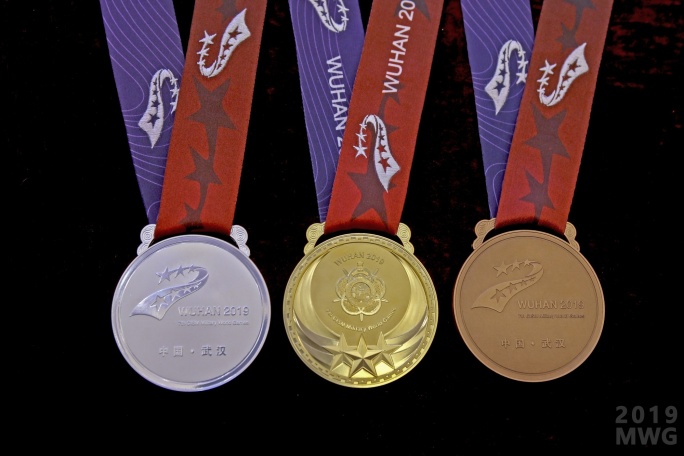 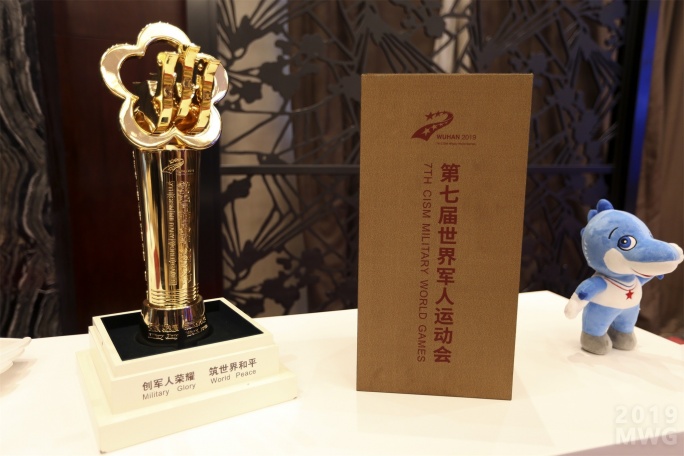 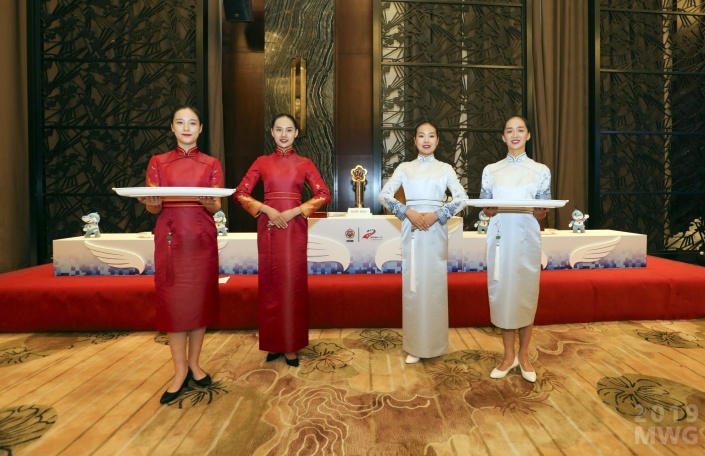 On the morning of October 10, Wuhan Executive Commission unveiled the medals and trophies of the 7th CISM Military World Games (7th CWG) at the press conference held in Wuhan Conference Center.

The medal design was open for public solicitation on May 17, 2018, and was finalized after rounds of appraisals. The final products have gone through 20 processes including molding, pickling, gilding, pressing, and gold plating.

The medal, known as“Star of Peace and Friendship”, measures 81mm in diameter and 5mm thick. The gold medal is made of brass and gilded with 2g of gold, the silver medal made of red copper and gilded with 2g of silver, and the bronze medal made of red copper and colored. The ribbon is made of high-count, high-density real silk and embroidered with the emblem in bright color and flowing lines. In addition to CISM logo and the emblem of the Games, the medal is also engraved with pentagram, wing, road, finishing tape, the Great Wall, plum blossom and the Yellow Crane Tower.

Military elements highlight the spirit of the Games. The dominant visual identities, three standard pentagrams respectively representing military soldier, military force and military affairs, are ingeniously arranged to resemble three running figures. Three men make a team. The pattern implies the prowess and dignity of soldiers. The personated pentagrams, together with the finishing tapes on both sides, looking like athletes running to the finishing tape, chant the energetic spirit of sport.

Chinese cultural elements remind of the charms of Wuhan. The medal is rimmed with the Great Wall pattern to boast the profundity of Chinese culture. The hanger, artistically shaping the city flower of Wuhan—plum, is perfectly merged with the medal, indicating the end of stereotypical“round plate”. The ribbon bears the emblem on the face, and waves of the Yangtze River and the Han River on the back, both in Han Embroidery.

Sophisticated production brings high artistic value. The medal, produced under the instruction of Mr. LUO Yonghui, a state-level artist and member of the medal appraisal committee of Beijing Olympics, embodies China’s most advanced coinage technology. Each medal is processed by overall laser sandblasting and partial brightening and peening to make rich texture. Eco-friendly treatments make the medal durable and resist corrosion and oxidization.

The trophy is named“Soaring”. Dominant patterns are plum blossom and abstract dove of peace, dotted with the figure 7 from the emblem, track and cloud. The soaring dove implies“World Peace” and encourages athletes to fight for new records. The figure“7” and the track suggest the 7th CWG. The cloud blesses the Games held in the home to clouds and yellow cranes. The plum blossom’s five petals are the Olympic rings chanting“faster, higher and stronger”.

The podium and tray, designed as a whole, feature the soaring dove to elaborate“Friendship and Sports” and the glory of military soldiers. The usher and the tray holder will be respectively in traditional blue-and-white and China red Cheongsam made of jacquard silk. Song brocade technique is used to present the“cliff and sea” pattern on the sleeves. Jade tassels on the waist give strong sense of Chinese culture and say“It’s a pleasure to have friends coming from afar”.

The original awarding music will signal the reminder, entry, awarding and exit. Composed by Ms. ZHOU Manli, Vice Chairman of Hubei Musicians Association, state-level composer, it adopts the rhythm of Jianli folk music Luo Luo Dong, an intangible cultural heritage. Chimes of bells and stones amplify the briskness and give strong charms of the oriental country. Traditional tones, Western brass and string instruments, military drums and horns together explain Jing-chu culture and Chinese music, and bring China closer to the world. The music is well structured, forceful yet flexible, and perfectly demonstrates the military prowess and the grace of Chinese culture.